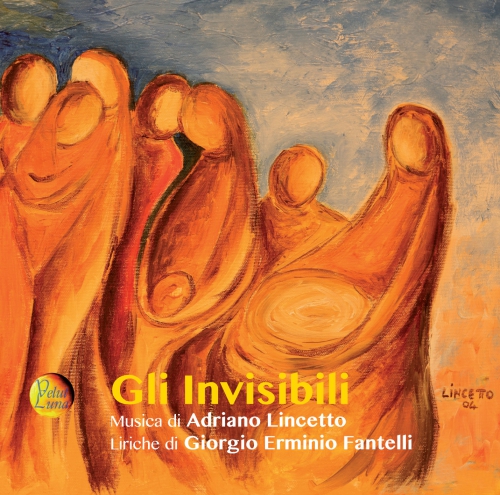 All recordings, mix and mastering are made by Marco Lincetto, using the latest standard in digital and analog technology, based upon custom modified microphones pre-amp, ADC and DAC and the exclusive Ribera Tube Microphones R12 and R47. Production: Velut Luna Executive producer: Marco Lincetto Editing of "9 Vilote Pavane": Michele Sartor Photos: Marco Lincetto, except for SolEnsemble, granted by the group itself Layout and Grophics: L'Image Cover Painting: Danilo Lincetto

VILOTE PAVANE "Vilote" are actually poems written in the ancient language from Veneto region, which had been somehow ?codified? by Angelo Beolco, named Ruzante, author, playwright and actor, born in Padua in 1496 and died in 1542. These poems are about rural themes, mainly connected to the theme of love, under the women?s point of view. Actually it is not a chance that Lincetto chose a female chorus. It is a selection of nine lyrics, derived from a larger collection of approximately a hundred. The musical writing is refined and not technically easy, considering, for example, the incredibly low range contraltos are requested. The stylistic reference to another 19th century important composer from Veneto, Gian Francesco Malipiero, is not trite and refined in its originality. 24 MELODIES Articulated on the 24 tonalities, the Melodies are born as a "plain" exercise for lyrical singers, to whom Adriano Lincetto devoted so much attention in his life and career. Actually, ever since the beginning, the autonomous value of this work was clear, so that a great bassoonist, Leopoldo Armellini, a well-known international interpreter, asked Lincetto to transcribe these Melodies for his instrument. Again, I personally realised a beautiful song from Melody No. 14, in 2015. The song - "Il Chiodo" ? was adapted for a large symphonic orchestra by Simone Tonin, on an original text by Rosella Caporale, who also performed it. 5 MOMENTI MUSICALI These "Musical Moments" are one of the only two compositions that Lincetto devoted to his instrument, the piano solo, in his whole life. In these nine minutes, the original style of the Paduan composer strongly emerges: he merges some indubitable inspiration sources, starting from Debussy to Bartok, but indeed giving them a genuine brand new "imprint", Adriano Lincetto?s. EL TESTAMIENTO This record could not but end with this short "operina" by Giorgio Erminio Fantelli. It is a giocoso short poem in perfect rhymes, simple quatrains written in an invented language, often almost onomatopoeic, based on macaronic Latin and obviously Italian. It is not strictly a literary work, but as professor Fantelli?s complimentary offer to his last students of the intermediate school. In fact, he devoted most of his life to the education of boys and girls in their most critical age, between 11 and 13, teaching Italian literature in the Intermediate School. His role, in primis that of "educator" in the broadest sense, was essential and significant for various generations of students, including the writer of these notes. Marco Lincetto