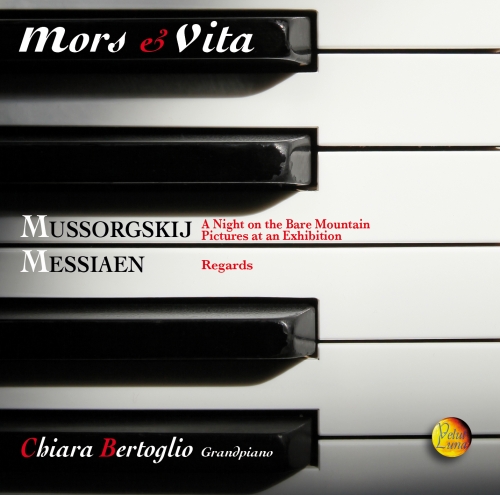 Messiaen and Mussorgskij: two completely different personalities, styles, approaches to life, to faith, to music. The former: a 20th-century French composer, whose language includes modes for pitch and rhythm, birdsongs, Indian rhythmic patterns, cryptograms and symbolism, and even scanty serial moments. The latter: one of the great Five musicians who promoted a genuinely Russian music in the late 19th century, and whose impressive talent was not constrained within the schemes of professionalism and academia, but kept the sovereign freedom of the ‘amateur’s’ creativity. The former: a Catholic who never concealed his faith and how it shaped his entire musical output. The latter: always in search of the infinite, continuously tormented by doubts, and constantly under the frightening shadow of Death, his only muse. However, as we will see (and hopefully hear), these two contrasting personalities have much in common, much more than one would expect.
Indeed, Messiaen thought very highly of Mussorgskij’s style, and more than hints of his influence can be discovered in Messiaen’s language, apparently so distant from the Russian’s. The Vingt Regards sur l’Enfant Jésus are twenty musical contemplations of the Child Jesus. Far from being just ‘sweet’ or ‘cute’, these works convey very complex theological thoughts and concepts, especially through the symbolism of some specific leitmotivs. Among them, we find God’s theme (a series of chords evocating the Tri-Unity of God), on which Nr. 1, Regard du Père, is entirely built, and which recurs very often in the Première Communion de la Vierge; and the Theme of the Star and of the Cross, which links the mystery of Christ’s incarnation with that of His Passion (Nr. 2). In the Première Communion, Messiaen explores the relationship between the Virgin Mary and her child during the nine months of her pregnancy, comparing this supernatural (and yet very natural) communion with that brought within the believer’s soul by Eucharist.
The contrast between this intimate and holy scene and the infernal Night on the Bare Mountain could not be stronger. Mussorgskij’s well-known work, a symphonic poem (here performed in Konstantin Černov’s fascinating piano transcription) depicts a witches’ Sabbath in honour of Černobog, the ‘black god’ of Slavic mythology. It is indeed a pagan cult of the darkness and of the evil, rather than simply a magical meeting: for Mussorgskij, there is a strong link between witchcraft, paganism, hell and evil. The Sabbath is ended when the first strokes of matins’ bells are heard, on the morning of St John’s feast; however, the conclusion does not sound as a clear victory of Good over Evil, but rather as a truce between two equally strong fields.
It is therefore striking that a similar starting point leads Mussorgskij to a very different conclusion in the Pictures at an Exhibition. These were composed in memory of Mussorgskij’s friend Hartmann, suddenly deceased in the composer’s presence. As mentioned before, the theme of death was a constant in Mussorgskij’s life and works, and particularly here. The Pictures of the first part, which are interspersed with the Promenades (a musical symbol for Mussorgskij himself and for his emotional reactions to the pictures) are delightful and sometimes very profound images: a frightening gnome, the impossible serenade of the village idiot to a beautiful girl (Il vecchio castello), the children’s quarrels after games (Tuileries), Poland’s heavy burden and its path towards liberty, symbolised through an oxcart in mud (Bydło), the ballet of unhatched chicken, and the caricature of two Jews, a rich and a beggar (Samuel Goldenberg and Schmuyle).
In the second part, however, Mussorgskij draws an amazing itinerary among the greatest questions of human life. Limoges represent a market, with its thousand colours, sounds, flavours: a symbol of life, vitality, relationships, on which the death of Catacombae blows like an axe (one is reminded of Hartmann’s sudden death): the musical alter-ego of Mussorgskij’s himself, the Promenade theme, is heard under ghastly tremolos, as if Mussorgskij was depicting his own death. Baba-Yaga, a horrible witch, is here again a symbol of evil, of hell, of man’s innermost fears. Her apparent triumph is here annihilated by the Great Gate of Kiev, under which a religious procession is passing: we hear the sound of bells, of the organ, of the priests’ choirs; the Promenade theme, portrayed as ‘dead’ in Catacombae, is here ‘resurrected’. This is life after death, the possibility of keeping our relationships with those we loved, through death, beyond death, and forever.
Chiara Bertoglio