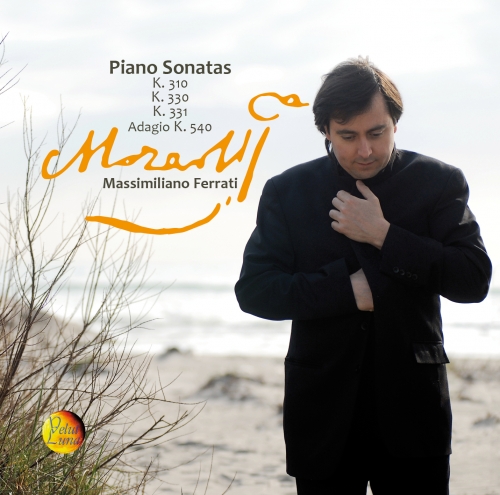 In the enriched music world of Mozart’s Piano Sonatas, the three Sonatas performed on this CD stand out for their originality but differ in context, structure and tone-color invention. Composed in 1778 in Paris, the Sonata K. 310 is often associated by biographers to the difficult period following the death of the composer’s mother. Written in a minor key, most likely uncommon in Mozart’s compositions, reflects the hard time he was going through due to the emotional emptiness left by his mother’s death, and the scarce artistic success in the Parisian music environment. The persistent use of rhythmic elements, combined with strong dissonances, leads to a dramatic culmination of the development in the first and second movement, already showing a romantic characteristic sonata-form. The third movement in Rondo form, insists on a theme where melodic line tends to close up by itself uneasy. The middle section in A major is a true oasis, where a simple and evocative melody seems to bring us back to a happy childhood, probably connected to the memory of his mother.
The Sonata K. 330, completed in 1783, differs in optimism from Sonata in A minor and it is today one of the most performed in concert programs. Even if it could be considered technically easy, it is complex in its aesthetic representation and requires the interpreter to have a very natural phrasing and an ability to reach deep intimate moments, surprising and suggesting the listener a glimpse into infinity as in the middle section in F minor in the Andante Cantabile. After the joyful character of the first movement and the humorous and mocking tone of the third movement (both in sonata-form), the Sonata ends with an unexpected last question, a brief stop on the sixth scale degree, an unexpected and serious moment of doubt. After a short pause, the sonata leads us back to the carefree and joyful character, now unstoppable with the three final chords. The Sonata K. 331, contemporary to the K330, is a rare case of a sonata without movements in sonata-form that gives to the composer more freedom in the structure. The K. 331 opens with a theme (“Andante Grazioso”) and 6 variations. The theme suggests the idea of a lullaby because of its lulling movement and variations give the composer a chance to create new tone-colors elements; such as, the use of legato octaves in the third variation in the minor key, in the fourth variation the crossing of hands to highlight the dialogue between the basses and the highest voice of melody of the left hand, all connected with the right hand central element. There are only two changes of time indicated by Mozart; Adagio and Allegro in the fifth and in the sixth variation. The composition offers to the performer the possibility to create a great movement, but never fragmented and always compact. The second movement comes easy, compared to the first one. There is only a change of form (Menuetto and Trio), but the key remains the same. In the Trio, the intersection between the two hands, emphasizes the elegant alternate scene of two characters: a male and a female. The third movement, “Allegretto. Alla Turca” is certainly one of the most popular composition of the piano repertoire. In Rondo form, in A minor key, it provides a continuous alternation between the minor mode and major one, a middle section in F sharp minor, and a coda also in the key of A major. Mozart uses tone-color inventions to simulate percussions in the march, which, at that time, this could be done thanks to an extra pedal. The Adagio in B minor K. 540 (Wien, 1788) is one of Mozart’s most deep and spiritual works. Here the composer uses sonata-form and an enigmatic language, touching distant keys, dynamic contrasts, dissonances and chromatic elements. The Adagio is full of a sense of existential instability but in the final coda in B major emerges a peaceful serenity and the final answer to the big questions of life.