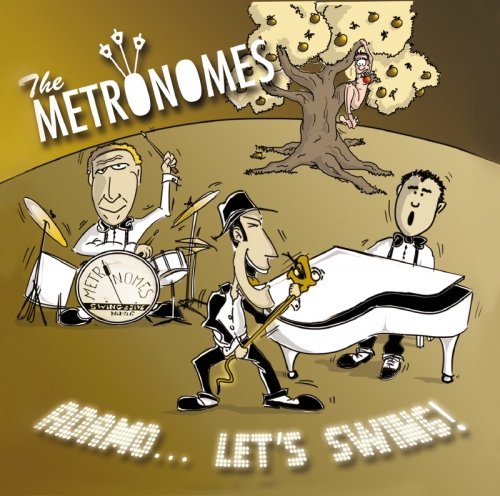 
Author: A. A. V. V.
Performer: THE METRONOMES
Support: cd

Six years have passed since I reviewed their last album, “Ciao Fred" - 2005 - Velut Luna, and since that time I have wondered what direction their music would take after their magnificent tribute to Fred Buscaglione
All the while, the three metronomes have continued to entertain anyone who has had the opportunity to see them perform live; making their fans sing, dance, laugh and cry with their endless repertoire of swing, blues, boogie and both American and Italian jumpin' jive.
Even today, if I have the chance to attend one of their concerts I find myself unable to stop tapping my foot to the beat of the drum’s pace by Stefano Fedato that, "jokingly" (how Jannacci would say), drags the trio to impossible speeds. I am always stunned by the asymmetrical and unique way Carlo Piccoli plays the piano, with his whole body swaying to the beat and with a left hand that plays like a bass. I still laugh uncontrollably when I see a ham actor like Francesco Michielin; The way he squirms like a maniac, constantly alternating between scratchy singing and the kazoo sounds that he mimics so well. He can mimic any instrument with his voice, from the trumpet to the guitar. Above all, though, I cannot help but be amazed by how only three musicians can create such complete and well-rounded sounds with their music!
After paying homage to the music of Fred Buscaglion, they have returned to the music scene with this new work, "Adamo... let's swing! " which is the fifth album of the Veneto trio.It’s a diverse and fresh album with tracks that immediately show the fun and ironic nature of their music; something that is happening maybe for the first time.
In order to understand the spirit behind the trio’s music, all you have to do is listen to their title songs "Adam" (an ironic, bold, and humorous comic strip is depicted on the album cover), "Iperteso" (Italian for hypertensive; who among us has not stumbled on the highway in a “hypertensive mood, wearing dark glasses and a hanging dress” while flashing the high-beams and honking the car’s horn in order to surpass the traffic?), or "Hard Times" (a ragtime piece reminiscent of music from the twenties enriched by vocal trumpets evoking the Mills Brothers sound).
A careful selection of past American classics from Gershwin to Louis Prima and from Duke Ellington to Nat King Cole completes the album. All in all the album has frequent variations in tempo and rhythm, tapping ragtime, the stomp, blues, swing and the jumpin 'jive, and it contains different quotes as homage to Louis Armstrong, Tom Waits, Louis Prima, Al Jolson and, of course, Buscaglione, who remains one of their main inspirations.
A cool and fun album that demonstrates, first and foremost, the joy & fun the musicians felt in creating it. In fact, it is enough to say that the Metronomes have lived to realize that when they play, they really know how to have fun!
And now ... Let’s swing! 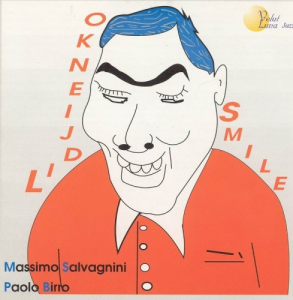 Original compositions by Massimo Salvagnini and American Standards Massimo Salvagnini, saxophone Paolo Birro, piano 20 Bit Digital recording. Live in studio at Pollini Auditorium, Padova, Italy. January - April ,1995 This work in duet, recorded partly in private houses and partly in a big empty auditorium, has an echo that endows the music with a particular tone and emphasizes the encounter of these two musicians, deepened into jazz notes and a brilliant improvisation, surrounded by a romantic atmosphere. First work edited by Velut Luna, a special tribute to Radu Lidijenko, Rumanian philosopher and man of letters. 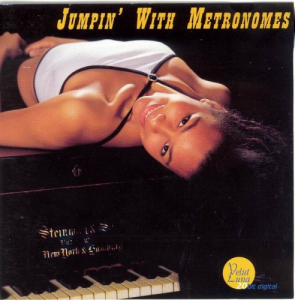 Traditional Italian and American standard from swing era The Metronomes: Francesco Michielin, vocal / Carlo Piccoli, piano / Stefano Fedato, drums Special Guest: Massimo Salvagnini, tenor saxophone 20 Bit Digital Recording. Live in studio at "Tocai Pub", "Osteria Due Spade" (Treviso). Novembre 1996 - March 1997 This record presents a series of famous numbers of the most important American ball orchestras of between the 20s and the 50s, including a tribute to the great Fred Buscaglione. All the songs are executed by an unusual trio consisting of piano, drum and voice along with the tenor saxophone of Massimo Salvagnini, who is a special guest on three tracks. Recorded at a small jazz club with no audience. 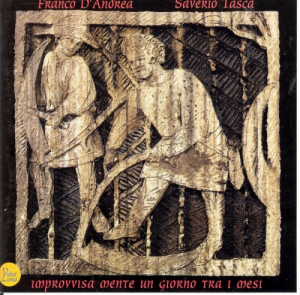 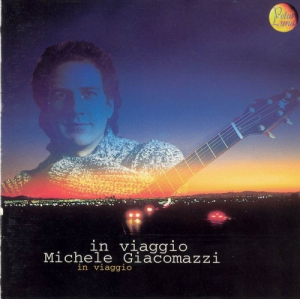 Classical standards from American songbook Michele Giacomazzi, guitars 20 Bit Digital Recording. Live in studio at Elena Amati garret room (Padova, Italy). January - March, 1998  Says Michele Giacomazzi about his record: "This work is a journey that has the taste of a homecoming. Allow me to explain: less than twenty years ago I had the chance to attend a concert where Philip Catherine and Larry Coryell played pieces by Django Reinhardt, Wes Montgomery and Jim Hall. Later on I met Joe Pass, Barney Kessel, Kenny Burrel.Then this golden list grew with the addition of Pat Metheny, George Benson, Robben Ford and many more. Without obviously forgetting Charlie Parker, Chet Baker, Michel Petrucciani and Toots Thielemans." This record is intended as a tribute to all these great masters. 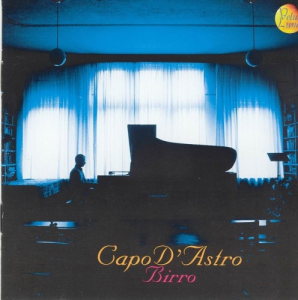 Original compositions by Paolo Birro and classical standards from American songbook Paolo Birro, grandpiano 20 Bit Digital Recording. Live in studio at Istituto La Montanina, Velo d'Astico (Vicenza, Italy). May, 1998 This work was recorded in the library of a wonderful nineteenth-century villa once home of the famous Italian writer Fogazzaro. The enchanting atmosphere of its pinewood and the delightful dawns can be felt throughout the recording. Paolo Birro caresses the keys of a magnificent Arthur Rubinstein's 1930 Steinway&Sons D 274 Grandpiano. Pieces by C.Porter, I.Berlin, Gershwin, J. Kern and others, with the addition of original works written by the pianist himself. 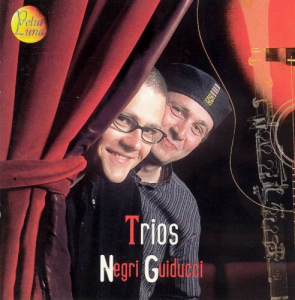 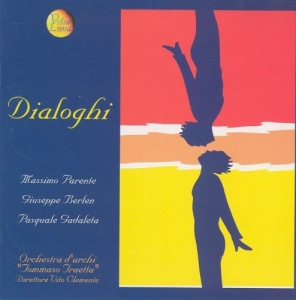 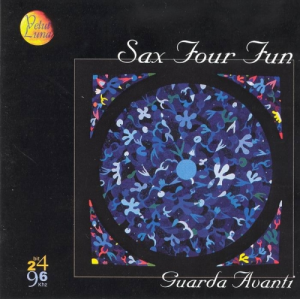 Original compositions by Sax Four Fun, William Tononi, Paolo Fresu, Bill Lee, Carla Bley, Paul F.Mitchell Sax Four Fun, saxophone quartet / Special guest: Pepito Ros, soprano sax 24Bit / 96 kHz Digital Recording. Live in studio at Sala Polivalente Abano Terme (Padova, Italy). July, 1999 A band of four saxophonists. In this CD, their second, the band strengthen and ratify their style, achieving perfection in its form of expression, a warm groove in their fastest pieces and a bewitching dimension in the ballads. "... A collage where irony and calm join together in a flowing river of fantasy, ending up melting new kaleidoscopic structures that open up to pleasure and joy...", write the critic Vittorio Albani. 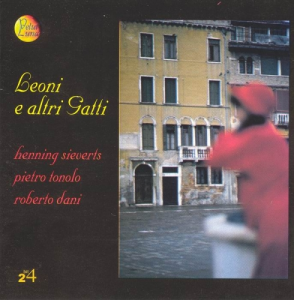 Original compositions by Henning Sieverts, Pietro Tonolo, Roberto Dani Pietro Tonolo, saxophones / Henning Sieverts, doublebass and cello / Roberto Dani, drums and percussions 24Bit / 96 kHz Digital Recording. Live in studio at Torresino Theatre (Padova, Italy). July, 1998  Henning Sieverts is a young but already well-known German jazzman, a cellist and a double bass player but, most of all, a long time friend of Pietro Tomolo. Their common passion and love for Venice is the seed from which the main suite of this record sprang up. The guest presence of the drummer Roberto Dani and his endless repertoire of rhythms and tones highlights the extraordinary quality of the recording, whose fascinating and warm sounds were achieved using 24 Bit technology in an empty small theatre of Padua. 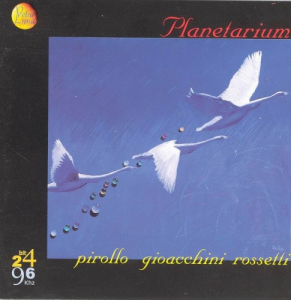 Original compositions by Gianni Pirollo Gianni Pirollo, clarinet and alto clarinet / Luca Rossetti, piano / Beppe Gioacchini, percussions / Aldo Lucchini, doublebass 24Bit / 96 kHz Digital Recording. Live in studio at Studio Papillons (Padova, Italy). February, 2000  This is how the authors describe their work: "Our music seeks clarity, melody, smoothness, an interior harmony that recalls the floating of the same planets to which in many pieces the Author refers. We can therefore assist to the melting of pure melody into an improvised paroxysm (Prisma) or to the centripetal whirling of a piece whose stillness hides a desire of escape towards outer worlds (Epicentro)..." 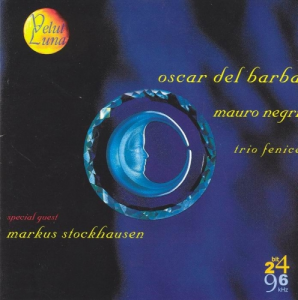 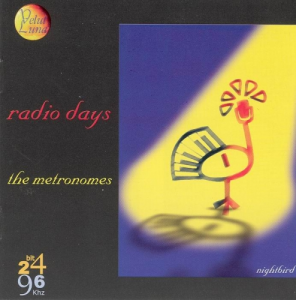