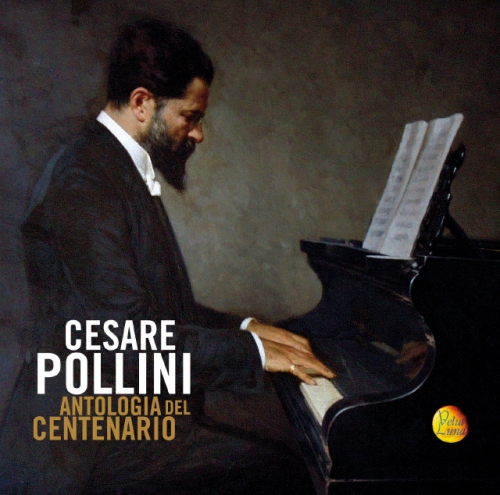 
Cesare Pollini, son of the Paduan nobleman Luigi de’ Pollini, was born on 13 July 1858. At a very early age he began studying the piano under the tuition of his mother Luigia, who belonged to the family of the Counts de’ Cassis-Faraone. In 1878 Count Pietro Suman sent some of Pollini’s works – until that time he was practically self-taught – to Antonio Bazzini, a distinguished composer, violinist and professor at the Milan Conservatory, who accepted him in his class in 1880. Cesare soon became one of Bazzini’s favourite pupils. Two years later he returned to Padua to become director of the Istituto Musicale, founded on 29 June 1879. On 5 December 1886 he embarked on a long concert tour of Germany with the violinist Antonio Freschi, another of Bazzini’s pupils. On 2 January the duo started the tour in Munich, where they received favourable critical notices, particularly in the Berliner Tagblatt. Among the pieces played was the Suite op. 3 dedicated to Richard Strauss, who was present in the audience. The tour continued through Frankfurt, Stuttgart, Berlin and Vienna. In 1889 he was invited by the Queen of Italy to the Villa Reale in Monza to hold a concert in honour of the Emperor William II. In 1892 King Umberto I appointed him as Knight of Saints Maurizio and Lazzaro and personally decorated him in Monza. On 26 January 1912 Pollini died suddenly at the age of 54. News of his death was given in the newspapers throughout Italy. The Istituto Musicale in Padua was duly renamed after its director.

The half century between the annexation of the Venetian territories to the Kingdom of Italy and the First World War is a period of decadent withdrawal, a historical moment in which the disillusionment of the post-Unification period combined with a sense of unease caused by an awareness that Italy was culturally backward in comparison with northern Europe. Even in Padua itself we find opposing tendencies at work, betraying a situation of cultural reorganization: on the one hand, the proud defence of the traditional viewpoints; on the other, certain bold initiatives and a slow move towards the more advanced opinions of contemporary Europe. Pollini played a significant role in the cultural scene between the end of the 19th century and the beginning of the 20th. In the words of Arrigo Boito, ‘among the most elect of the art, he occupied a special degree of eminence and nobility’. In the course of his prolific activity as a concert artist, composer and musicologist, he had cultivated an extraordinary wealth of experiences, which he generously put at the disposal of Padua’s cultural life. Thanks also to his friendships with illustrious figures in Italy and Germany (as well as Richard Strauss and Antonio Bazzini, we can also mention Giuseppe Martucci, Giovanni Sgambati, Oscar Chilesotti and many others), he enthusiastically promoted European music in Padua, changed the concert programming and gradually refined contemporary musical taste. One initiative worth mentioning is his organization of ‘musical matinées’ at Palazzo Selvatico Estense. These were concert seasons with programmes focused on the German Romantic repertoire, hitherto practically unknown in Italy and judged to be unbearably boring to audiences: ‘The concert programme aroused the utmost reserve owing to the complete exclusion of vocal pieces and the dominance of classical composers, whose names sent shudders down the spines of most musical lovers and inevitably threatened the kind of appalling tedium that on such occasions inevitably hovers, like a nightmare, over their heads’. As in most Italian cities, Padua was divided between musical habits groomed on opera and drawing room music and the enlightened mission of an elite intent on bringing local tastes closer to European models. A significant event was Pollini’s publication of his Terminologia musicale tedesco-italiana in 1894. Many were the commemorative concerts he organized: for the seventh anniversary of Wagner’s death (1890), as well as for Gioachino Rossini and Giuseppe Tartini (1892), Anton Rubinstein (1895), Antonio Bazzini (1897), Johannes Brahms (1898), Giuseppe Verdi (1901) and Edvard Grieg (1908).