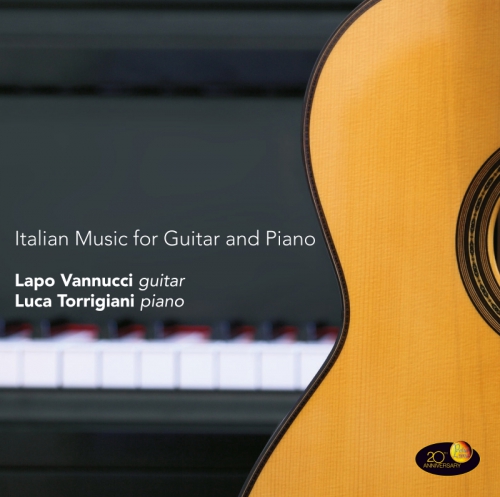 ITALIAN MUSIC FOR GUITAR AND PIANO

Share
Close friends Lapo Vannucci and Luca Torrigiani formed their duo in 2010 with the intent of exploring new ways of presenting music for guitar and pianoforte.
Both graduated with honours from the "Luigi Cherubini" Conservatory in Florence and have continued to develop within their fields studying at prestigious music institutions such as the "Incontri col Maestro" Academy in Imola, the Scuola di Musica di Fiesole and the "Alfred Cortot" École Normale de Musique de Paris.
In tandem with their intense programs of solo appearances the duo regularly perform in Italy and abroad, to unanimous acclaim. The critics applaud their great communicative capacity and the constant attention given to the beauty of their sound. They are particularly active on the contemporary music scene, and have premièred pieces dedicated to them by composers Luigi Giachino and Giuseppe Crapisi. Together with the Râmnicu Vâlcea Philarmonic “Ion Dumitrescu” and the Bacău Philharmonic “Mihail Jora”, they performed "Tre Paesaggi": a concert for guitar, pianoforte and a string orchestra written by Francesco Di Fiore for the duo.

ITALIAN MUSIC FOR PIANOFORTE AND GUITAR
It is generally believed that the union between pianoforte and guitar presents a complicated rebus for composers and musicians alike: the acoustics and approach of these two instruments make them too unbalanced to be blended, too different in levels of volume and too divergent in their "thought processes" or construction of harmonies. In short, when played together, the pianoforte and guitar tend to prove almost incompatible. Furthermore, if the guitar lacks amplification support, even at a minimal level, the pianoforte needs to be played almost always with extreme delicacy. Despite these factors and the usual perceptions, many composers, above all in the twentieth century, have achieved splendid results with the masterful use of the ‘full’ and ‘thin’ sounds of the respective instruments, by paying particular attention to a non-conventional dialogue between them, subtle composition and, of course, a good dose of instinct, which is never a bad thing. The disk in your hands proves these triumphs and contains a collection of original works for guitar and pianoforte composed between 1950 and today, both from renowned and less renowned Italian composers.

The journey begins back in 1950 with one of the composers whose name, intentionally or not, is synonymous with the guitar, namely the Florentine Mario Castelnuovo-Tedesco (1895-1968) who wrote Fantasia op. 145 in two brief witty movements dedicating it to Andrés Segovia and his pianist wife Francesca ‘Paquita’ Madriguera Rodon. A miracle of balance that recalls the inescapable French influences while displaying its exuberant and personal inspiration from opera, it oscillates between an atmosphere that pays homage to Spain and an entirely Italian, or rather Tuscan lyricism.
Another two-part composition entitled Fantasia consists of a single movement written in October 1979 by Brescian composer Franco Margola (1908-1992), that was dedicated to the duo formed by guitarist Guido Margaria and his wife, Emilia. Although this quiet, neo-Baroque piece does not integrate the two instruments to the same level as that of Mario Castelnuovo Tedesco, it still succeeds in creating a dialogue between the two instruments, cleverly alternating rather than overlapping the two sounds. From a stylistic viewpoint, Margola drifts between hints of Bach and pleasant flashes of eighteenth century Italy.
Another track dedicated to the Margaria duo is the short piece entitled Improvviso, composed between November 1979 and the spring of 1980, not too different from the atmospheres of the former track, making it seem like an appendix in triple time that mixes the initial mazurka with a persistent neo-Baroque ensemble.
Fantasia is yet another piece dedicated to the Margaria duo, and was written in 1980 by Carlo Mosso (1931-1995), who spent his early years in France before settling in Piedmont. This piece is meditative and restless, rigid, rich in archaisms yet at the same time modern and intentionally rough, built on a handful of melodic cells that are linked together and in certain points are reminiscent of the works of Frank Martin from Switzerland and the popular Italian composer Gian Francesco Malipiero.
The piece entitled Divertimento a due was composed by Padua-born Adrano Lincetto (1936-1996) and is divided into three movements (Molto lento. Poco mosso – Allegro molto – Finale. Molto moderato and cantabile. Allegro vivo). Beyond any doubt, it is less enigmatic and a far cry from modern and postmodern complications, in its intricate modal style with numerous seventh chords.
This rich compilation ends with two tracks that were written specifically for and dedicated to Lapo Vannucci and Luca Torrigiani. Il silenzio del tempo by Turin composer, Luigi Giachino (1962), was written in 2015 and is a suite in four movements, with notes of jazz and whispers of other, almost impressionist styles.
In a six-minute track, the totally different Winter Time, written by Sicilian composer Giuseppe Crapisi (1967) proposes a blend of bold, repetitive and headstrong gestures typical of a minimalist yet more melanchonic style. In this case, the two instruments rarely alternate but often blend their sounds, now delicate, now rhythmic, in a largely contemporary key.